I am truly blessed to have grown up in a two-parent household. I can’t imagine who I would have become had I not had both of my parents.

Unfortunately, in my circle of friends and the community I grew up in, it seems that two-parent households is a rarity. I’ve observed what I believe to be the effects of not having a father; again, I say I am grateful.

My father has always been a valuable part of my life. I don’t think he can fully grasp how important his role in my life has been or how much I admire him.  He is the epitome of a good father. Now, I’d be a liar if I said that my relationship with my Dad has always been peachy. As a teen, I went through a “I can’t stand him” phase. Anything my Dad said or did annoyed me tremendously. I always had a bad attitude when it regarded him. I could not tell you why I was so nasty towards my Dad, but I do know he didn’t deserve it. I know that phase of my life had to be bothersome to the man I was always running behind. Eventually, I grew up.

As much as I resemble and model after my Mom, I am very much a product of my father. Basketball and watching movies are two hobbies of mine that I can attribute to him. He’s also instilled in me the value of hard work and doing things wholly. My sense of humor is a quality I inherited from him too. The list goes on.

As my eyes get watery while looking over pictures of he and I, I realize how happy I am to have my Dad. We’ve shared a lot of tears and laughs. We’ve had our ups and downs, but my Dad has a vital role in my life and I don’t know where I’d be without him. 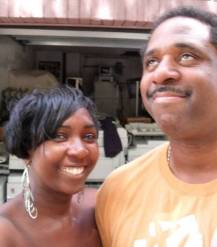 I wrote this post because I wanted to share with everyone that good fathers do exist. Logging into Facebook, I am constantly reminded that there are a ton of deadbeat dads and the chatter only seems to heighten when Father’s Day nears. While, I am fortunate to have my father in my life and know this is not the case for everyone else, I just don’t understand why there has to be continual bashing of fathers as we near Father’s Day. I’ve noticed that those same sentiments are not shared when Mother’s Day approaches. Is it because the percentage of children raised by their fathers is so small that their voices aren’t heard? I don’t know. If you don’t have a father who is worth celebrating, divert that attention to someone who has assumed that position and deserves to be celebrated. I know that a lot of people recognize their Moms on Father’s Day, which is understandable. The day was made official to celebrate the well-deserving fathers (or the person(s) who assumed that role) not the shortcomings of the fathers who are unworthy of recognition. Allow this holiday to be a positive one, focusing on the men (and women) who have provided for their children and have committed to being the best father they can be.

Writing is my passion. Please support and subscribe!
View all posts by Tyla Times »