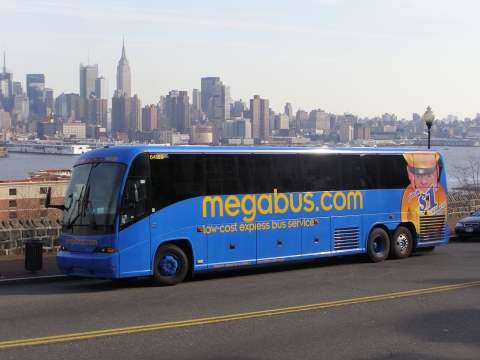 I have always been a family oriented person, which made my decision to move a difficult one. That being said, I am always looking to travel back home to visit with my family. Although, I love my Chevy Camaro, I’ve realized that I’ve been driving my car to death. So, I’ve had to research alternative ways to travel home. Of  course, I could travel by train or plane, but those can be quite expensive.

A few months ago I spoke to a friend about finding a new means to travel home, and she suggested the Megabus. I was reluctant to try it because I’ve never traveled a long distance on a bus. At some point or another, I decided to try it.

Since this was the first time I’ve ever traveled a long distance on a bus, I don’t have anything to compare it to. I had preconceived notions about riding the bus, but they diminished once I had the opportunity to ride the Megabus. The bus was clean, and well-kept. The bathroom was okay, but that was to be expected on a bus. The Megabus also offered free WiFi and charge ports for your electronic devices. This was a great service to have and the most important to me. The noise level was acceptable; there weren’t crying babies or loud talking patrons.

I’d like to say my experience with the Megabus was perfect, but that’s just not my reality. I have four cons as it concerns the Megabus. The first issue is the travel time. From what I can tell, there isn’t a consistency in travel time. On my first trip to Orlando we arrived early, and the return trip arrived on time. My second trip to Orlando, we arrived late, and returned late. The second issue I have with the Megabus is an employee who I thought was extremely rude. He was not helpful and refused to read clearly legible confirmation numbers; the confirmation numbers allow people to get on the bus. The third issue I have with the Megabus is actually its site. I had issues with making a payment and ended up not being able to get the trip that I wanted due to it. From what I was told, if you put a space after your email address, it won’t accept it. Putting a space after my email address was done unconsciously. The last issue I have is that the main amenities on the bus stopped working during one of my trips,which include the bathroom and charge ports. The bus driver did try to amend the bathroom issue by stopping at a rest stop. The charge ports were unable to be fixed during the trip.

Overall, I would recommend travelling on the Megabus. It’s affordable, comfortable, and runs close to the actual time it may take you to travel somewhere. Many of the people I’ve had to interact with were respectful and nice. Now, if you’re expecting complete silence and a first-class type of ride then I would not recommend this form of transportation.